Hello friends and enemies. I am back for another round of My Incredible Opinion—season 2, if you like. Many of you may have found out about me from season 1 of “My Incredible Opinion,” where I focused on medical freedom, vaccines, natural health, and that sort of thing. I always thought I would expand the show into other topics I felt particularly opinionated about—politics, religion, culture, etc.—but the medical freedom topic became so important to me, I ended up talking about just that for a couple of years. Almost 130 episodes worth. I even wrote a few books based on the research I did (available on Amazon or the store).

Here we are, in the year 2021, staring down the barrel of a dystopian future much worse than anything I dreamed of just a few years ago. Although I would prefer to stay in my hobbit-hole and live a quiet life, I’m afraid things have gotten too crazy for me to say or do nothing. Although I was hated for my anti-vaxxing ways last time around, I can guarantee things will be much worse this time. Not just because people have gone vaccine crazy in the time since, but because I believe a more dramatic solution may be necessary for people like you and me to live in peace. My Christian faith will feature much more prominently this time and with that mindset, I’m going to call out quite a few things that we must fix—and soon.

A few years ago, I spoke at an event in Atlanta that was focused around a protest at the CDC. I proposed something dramatic: a new constitutional amendment. I called it the Medical Freedom and Liberty Amendment and its goal was to guarantee American citizens the right to bodily autonomy. It was designed so that state governors or public health officials could not mandate vaccines or any other medical procedure against your will. I was extremely concerned about the potential for problems because of the growing influence of pharma within the highest levels of our government. I was also extremely concerned because it was something that the Bill of Rights did not cover—not directly, at least.

As I talked about the amendment over the next few months, a couple of thousand people expressed an interest in the amendment by signing up for alerts and updates. As I struggled to figure out how to proceed, I realized a few problems: 1) A couple thousand people weren’t enough to make any meaningful amount of noise in the national political landscape. 2) Many of us had extremely different political views on other things. We agreed on the medical freedom situation, but beyond that, many of us were different. These were problems that any political movement has, and could potentially be overcome, but the third problem was the biggest one: 3) Many of the existing amendments in the United States Constitution were already being threatened—completely ignored in some cases. How would spending a couple of years to have a medical freedom amendment added to the Constitution matter if it would just be ignored any way when push came to shove? Because of that, I gave up. We were in the minority, we had very little unity outside that one issue, and many politicians were likely to disregard the amendment anyway.

Seeing what’s happened to America in the last 6 months has confirmed my worst fears. Our medical freedom is being threatened like I couldn’t have imagined just 2 or 3 years ago. It’s actually a thousand times worse. And politicians, goaded on by public health officials, are wielding executive orders that are destroying our economy without any apparent concern for the guarantee of personal freedom and liberty our constitution guarantees us. An amendment would do us no good now.

And so, we are faced with the prospect of a difficult future. Already under draconian mask rules, it is likely residents from some states may have to choose between moving or submitting to the coronavirus vaccine. Even if every candidate that was sympathetic to our cause won their election, it still wouldn’t be enough people to stop the decline that is before us. Mask mandates are likely to continue. Mandatory coronavirus vaccines are likely in some states, and many of the religious and philosophical vaccine exemptions some states have will drop like flies.

I refuse to wear a mask. I refuse vaccines. I refuse to be tracked or even tested. I refuse these same things for my family. I refuse many other things—which I’ll talk about soon—that are accepted as normal and healthy to our society. If you’re like me and refuse these things, you’ve got to start asking—what happens to us? How do we live our lives in this environment with these beliefs? How do we get groceries? Travel? Medical care? Go to college? Go to church? The future of life in America for people like us looks very bleak, doesn’t it?

Here’s where the significant change comes. I believe the time has come to start talking about what’s next for people like you and me. As a patriotic American who loves this country, it pains me to even contemplate it, but I don’t see any other way. The radical shifts we have seen over just the last 6 months can’t just be rolled back. It’s been 50 years and we’re still adding fluoride to the water supply. Why? Old habits die hard, even when it’s clear they may be harmful. The masks and vaccines and fear and hysteria have become ingrained in most people’s daily lives. Some are happy with things the way they are. I’m not going to stand living like this. I won’t comply with masks, vaccines, tracing apps, tracking, testing, or any of it. Period. Ever.

This new season—season 2—of My Incredible Opinion isn’t as much an attempt to change people’s minds so much as it is a search for people who are like me. I’m sure they’re some of you out there and I want to find you. I’m tired of bickering and protests. I just want to find my people. Many people feel the exact opposite from me—and that is fine. They are as terrified about NOT having a mandatory coronavirus vaccine as I am OF it. They can live in fear and compliance to their pharmaceutical overlords. I won’t. I have no desire to change their mind. I don’t want to argue another word.

I have decided to take this conversation seriously so that people like you can decide if you might want to be a part of it. Here’s the thing, it’s not for everyone. Even if you’re 100% with me on the vaccine and medical freedom thing, it may still not be for you. Why? Because this new community—or whatever it turns in to—is designed for unity. For the opposite of diversity. For people who agree on as many things as possible—not just this one thing. You see, I am weary of not only with the medical freedom issue, but many other facets of life in America. I am tired of feeling like my faith, my culture, even my gender—are constantly under attack and blamed as the source of all the world’s problems.

So, I am going talk about what a future community might look like in the same way nations have always existed—not a random group of people who happen to occupy a piece of land and say they all believe in “freedom,” whatever that means, but a specific group of people that are alike in as many ways as possible. For me, that will mean a Christian community, made up of believers who worship the God of the Bible without apology. This means a return to older cultural and social norms that have sustained humanity for thousands of years. This means a rejection of many modern distortions of the Bible, something which will cause us to be hated. Our revival of traditional gender roles will make our acceptance unlikely. Our denial of vaccines will likely make getting medical care more difficult. We may need to support ourselves. We may need to grow our own food. I have no visions of grandeur of being self-sufficient, but in a sense, there is a possibility we will need to become autonomous in a way many of us have never had to do.

I’m skipping over many details for now, but I want you to understand that many of you may not like me for this. You may have THOUGHT you liked me and felt my views on vaccines and medical freedom made us kindred spirits but hearing me speak of these things puts me in a different category of friend than you thought I was. That’s okay. I am glad we have had this in common and have enjoyed getting to know many of you along the way, though we may have been very different outside of vaccines and medical freedom.

As I’ve indicated, I’m afraid that America may have run its course for folks like me. We had a good go at it—almost 250 years, the same as many other very famous empires—but for me and my family, and possibly yours, it may be time to think about loading up the wagons and finding a new place we can call home. A place where our ideals are embraced and not threatened with extinction every election cycle. A place where our faith is considered the normal and natural system of belief. If this is something that you and your family might be interested in, I urge you to pray about it. This will not be easy. This is not something I’m undertaking lightly. It has taken me years to get to this point. But if you DO feel like this is something you and your family might be interested in, please consider getting in touch or at least following along by subscribing or supporting me here at myincredibleopinion.com. I don’t know how long they’ll let me keep the website up, but I hope that we can get in touch and possibly meet each other someday soon. Possibly sooner than we think. And that is my incredible opinion.

If it isn’t already obvious to you, we are forking. The United States is splitting apart. Many other nations are going through the same thing. There are some very different paths that humanity is dividing along but, in general, you can basically group things between two different schools of thought 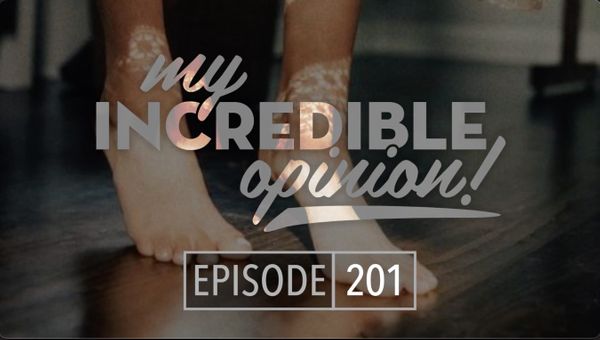 It has been far too long since we last spoke. I apologize for my absence—I was under the impression that anti-vaxxers had everything under control and that the world was on the verge of a massive health revolution. Just kidding, of course—I actually discovered that I hate nearly all