There is no such thing as herd immunity. It doesn’t exist in real life. Herd immunity basically means that if enough people become immune to an infection, it will have a harder time replicating and eventually will die out. It was a theoretical idea that some epidemiologists in Baltimore proposed back in the 40s when they were studying the way Measles spread. It never got much notice in the scientific community, as it was always assumed that—like everything else in the world—mother nature always got her way. Viruses and bacteria might sputter out eventually, they might mutate, they might keep going, but whatever happened, it had nothing to do with mankind. Trying to eradicate a virus would be like someone suggesting they could stop waves on the beach. They will come and go with the changing tides or storms or the position of the moon but there is nothing in the world you can do to stop, start, move, or shift them. Nature will always win.

There is a completely bogus scientific myth that has been repeated ad nauseum for the last one hundred years that the smallpox vaccine eradicated smallpox. We’re not even sure that smallpox has been eradicated at all, for starters. The nature of smallpox infections had changed so much by the early 1900s that they were beginning to resemble something else. And the smallpox vaccine wasn’t a vaccine at all, but an extremely nasty inoculation. That means they were basically purposefully giving you an actual infection or disease.

The tale is that if you got a similar infection from milking cows—what they might call cow pox, you would be immune to smallpox. Because cow pox was considered less harmful, people started purposefully infecting themselves with it in hopes it would protect them from smallpox. Whether this even works has never been proven, as far as I know, and really wasn’t even studied very much. There is no other vaccine that I know of that makes use of a similar concept—that a variant of one type of virus will protect you against another and in fact, we are already seeing how poorly the current COVID-19 vaccine is responding to circulating mutations.

We’re just 4 months in, and the COVID-19 vaccines are already outdated. Imagine thinking that from 1796 to the 1970s they were able to magically keep up with the changing smallpox virus strains and eradicate an entire strain with a vaccine whose claim to fame is that scientists have no idea what’s in it. Because the smallpox vaccine was grown in various animals over the decades, they no longer have any idea what it contains. “But it works!” they’ll say, confident their white lab coat will smooth over any perceived weakness in their convictions.

There’s a difference in the way a natural infection works in your body compared to a vaccine-caused one. Every vaccine and virus and bacteria are different of course, but with a natural infection, the human immune system apparently keeps copies of a particular virus around in order that its immune system stays up-to-date. It doesn’t always “clear” an infection—meaning, it doesn’t get rid of it completely, but lets a few stragglers stick around, continually priming the immune system to generate antibodies. That’s likely why the body’s acquired immunity works so well. It “remembers” the infection because it holds a grudge. It keeps a reminder of what it once fought off so that it will never forget. Regardless, if you are already immune to an infection, and get the virus again, your body will simply handle it faster. The virus will still replicate in your body, just for a shorter amount of time before your immune system is able to get on top of things.

Vaccines often cause a much different response—a more specific response that doesn’t last very long. This is why you see boosters and yearly flu shots. If you would have gotten an infection naturally, you’d never have to worry about it again. But because you opted for the vaccine, you’re now beholden to their system. You can’t go back—your immune system is now programmed incorrectly.

Regardless, when you hear them talk about having 95% of a population vaccinated to achieve herd immunity, you just have to laugh. What do they think that’s going to do? The vaccine is going to wear off within months and not work anymore. Many microbes are going to mutate in such a way the vaccine doesn’t work at all. Most vaccines create antibodies that are designed to protect against bad symptoms rather than an infection itself. This means they don’t stop you from getting infected, and they likely don’t stop you from spreading an infection.

This is apparently the case with the COVID-19 shots. There are three significant mutations scientists are tracking with more on the way. The South African variant performs extremely poorly against existing vaccines and Fauci and other idiot health officials are going to have to act surprised. “We had no idea this would happen!” they’ll say. Pfizer officials are currently saying a third dose of their COVID vaccine may be needed to combat mutations. Yes, seriously. More of the first vaccine will somehow magically help your body fight a different strain. I would love to go into the science on this, but it’s boring—and frightening. If you want to see something terrifying, watch this video from Dr. Penny Moore in South Africa showing how—and why—the existing vaccines are performing so poorly against these coronavirus mutations.

This will continue on and on and people will continue to lap it up. The line for comfortable lies is always longer than the one for uncomfortable truths. Even if 100% of people were naturally immune to a virus, that would not eradicate the virus. The trillions and trillions of them that float in the air and are probably floating throughout the ocean depths will still go on, doing its thing. It may have a harder time replicating itself but remember that viruses aren’t really living things. They will not run out of food or water. They will just continue on until they’ve mutated themselves into obscurity.

Humans are so much more insignificant than we would like. They want so badly to believe that our syringes and miracle potions can wipe out the most numerous types of “life” form (if you can call them that) on the earth. There has never been a virus or bacteria that has ever been eradicated due to humans. It didn’t happen with smallpox, it didn’t happen with rinderpest (an animal disease), and it certainly won’t happen with COVID-19.

There is no such thing as herd immunity. A billion shots in every arm will never create it, and even a natural infection won’t do much to change anything. So, for those of you waiting around in hopes of hugging and going out in public again one day, good luck with your vaccines! And that is my incredible opinion. 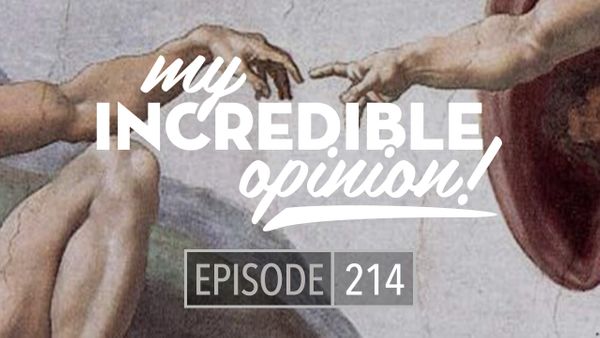 The Vatican is hosting a massive conference in a few weeks called “Unite To Prevent & Unite To Cure: Exploring the Mind, Body & Soul” and I’m going to go ahead and spoil the ending for you—no hymns will be sung, there’ll be no altar call, and I will be very surprised if a single prayer is uttered.

It's been just a few months and vaccine manufacturers and public health officials are already talking up—not only the likelihood, but necessity of—getting booster coronavirus shots.