Marriage is a covenant, promise, and relationship between a man and a woman. Anything else is not marriage and I want to explain why.

If any man wants to provide a stable and secure future for his family and descendants, you must focus first and foremost on creating—or sustaining—a stable nation. It doesn’t matter how much money you earn and save, how big your house is, or how peerless your reputation. Without a stable nation, the inheritance you leave your children will be meaningless. For that reason, all men have a familial duty to nationhood. It’s not just patriotic—it’s a duty to your family to maintain the stability of your nation. Otherwise, your children will be forced to live in fear, amongst rampant crime, instability, and possibly war. It doesn’t matter how much money you save up for them, when nations fall apart, everyone suffers.

For some reason, we have forgotten to teach our children that stable nations are a relatively uncommon occurrence—particularly those nations that allow their own citizens to determine who governs them. Strong, stable nations that are ruled peacefully through self-determination are the exception, and not the rule. They don’t happen by accident and often come with a great cost. We were very fortunate in America to have experienced nearly 250 years of it. But the creep of government overreach is a constant threat—one that must be consciously and continually rejected every time you step into the voting booth.

Teaching men to understand this before they vote in political elections is important. Every vote—federal, state, local, no matter how big or small—every vote should be viewed through the lens of answering this question: “Is this likely to preserve or destroy my nation?” “Will this person likely increase or decrease the threat of government tyranny?”—another question you should ask about any candidate you vote for. The health and wellness of any nation is always being threatened externally and internally and when the majority of men in a nation don’t understand this and actively fight or vote against it, the nation will not survive. And when the nation falls apart, you have nothing to leave your children. No safety. No security. No stability. All the money and cars and houses won’t matter. You might as well have left them with nothing.

What does this have to do with marriage being a covenant between a man and a woman and nothing else? Marriage is one of the most important institutions we celebrate as humans, and it’s not just because of “love,” although the Hallmark greeting card company would have you believe that. Marriage isn’t just a piece of paper and in fact, isn’t just a promise between a man and woman. It is a promise FROM man and woman TO their surrounding family and community. In effect, they’re saying, “We will strive to make this relationship and the family that results stable and a benefit to everyone.” Your family and community, by attending and witnessing your marriage, reciprocate this promise in effect by saying, “We will do whatever it takes to help make that happen.”

But that isn’t all. Marriage between a man and a woman should be honored, encouraged, and celebrated specifically because it is the main engine which fuels a strong nation. How? Because marriage between a man and women can produce children—and children light the nepotistic fire to create a stable, secure future like nothing else can. Someone with no children will have far less motivation to fight to preserve their nation than someone with. With a family full of children, mothers and fathers in particular will shoulder a superhuman burden in the hopes that their children inherit a stable nation.

If a nation fails to honor marriage, whether by eliminating the stigma of divorce, or by trivializing marriage to the point of it being irrelevant, that nation will not last. There must be a constant drive to preserve the nation driven by a selfish, nepotistic desire to provide a stable future for one’s children. There is a tipping point that occurs when enough of a nation’s adults don’t have children of their own whose future they are willing to fight to protect. When this point is reached, when there are enough adults who don’t have the wild nepotistic drive to provide for their children through preserving their nation, the nation will perish.

Unfortunately, we are past that tipping point in America. There are many heterosexual couples who have chosen to forego having children for some virtue signaling points. Some of the most depressing things I have ever seen are social media fur-baby birthday posts or “I’m the proud grandparent of a Golden Doodle” bumper stickers. I realize some people have tried to conceive and have been unable to and I recognize that as one of the most significant pains a person can experience—this isn’t about you. I’m talking about couples who have purposefully chosen not to  have children. Separated and remarried couples can also complicate this—likely a big reason the Bible takes divorce so seriously.

I can just hear screams of protest that I’m suggesting stepparents—or even adoptive parents—don’t love their children as much as biological parents do. I believe that’s obviously not true. I’m guessing there are many adoptive or stepparents who love their children far more intensely and would be willing to sacrifice themselves much more readily than some biological parents. Regardless, nationhood is hard. It is tenuous. It is constantly under threat. And I am telling you, without the nepotistic drive that comes from married men and women working hard and together to provide a stable future for their children, nations won’t survive. That is the model for which we must strive. That is the tradition we must protect.

Nowadays people will make a vow to anyone and anything on the planet. You may have all the trappings of a wedding—fancy clothes, a ring, a giant cake, but in the end, it may count for nothing. Celebrating the institution of marriage as a covenant and promise specifically between a man and woman—and the children who are born as a result—is one of the most important things we can do to create or sustain our nation. Anything else will eventually destroy it. And that is my incredible opinion. 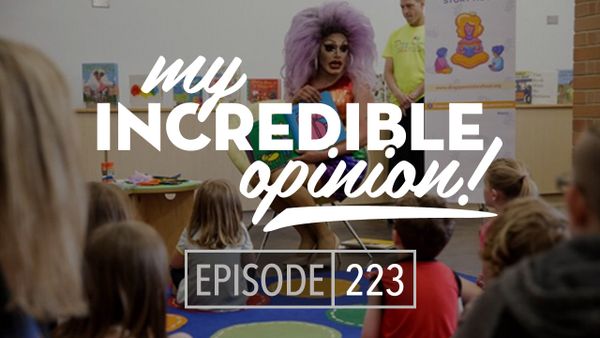 It’s June and evidently June is the month when the LGBTQ community has decided it will celebrate itself. The government of Canada has decided one month not long enough and has dedicated the entire summer season to the celebration of… the people they are and the things they do.

Boys who don’t love their country grow up to be men who won’t fight for their country. Nationhood is the lowest common denominator of the human experience. You can call it community, your tribe, your people, your whatever, but regardless, humans always have to band together for protection.