In my new book, “The Autism Vaccine,” I track two children whose lives were affected by the disorder. One of them you’ve probably heard of. Donald Triplett has been mentioned frequently in books and news accounts because he is considered the first child ever diagnosed with autism. He is still living, and his life story is truly incredible—I talk about him quite a bit in the new book and would love to meet him someday.

The other child is someone most people have never heard of, though her life story is even more fascinating. Emilie Dionne was one of the Dionne quintuplets. If you don’t know who they are a little backstory is in order: In 1934, on a farm in the middle of nowhere in Canada, a woman gave birth to five identical girls. Before then, a few sets of quintuplets had been born, but none of them had ever lived past 50 days. Newspapers caught wind of the Dionne girls’ birth and started covering their story as they fought to survive.

Locals came by and would gawk at the hundreds of tiny cloth diapers hanging on three clotheslines in their backyard. So many people came by to try and catch a glimpse of the girls that their father erected a fence around their yard, then topped it with barbed wire, then hired a policeman to help control the crowds. It was absolute mayhem.

The Canadian government assumed “guardianship” of the quintuplets and built a nursery/home for them to live in 24/7 across the road from the farmhouse they were born in. There Emilie and her sisters were cared for by full-time nurses and the doctor that had helped ensure their survival. The crowds continued to grow, more barbed wire fences were erected, more policemen were hired, and eventually a large playground was built that was surrounded by a viewing gallery for people to observe the girls at play.

During the summer, thousands of people would line up outside the barbed wire fences to try and rush into the viewing gallery building to be able to watch the girls make mud pies in the sand and race around their playground on five identical tricycles. They called it Quintland, and visitors came from all over the world. The Dionne quints, as they were known, were some of the most famous people on the planet. Donald Triplett was familiar with the Dionne girls and had even named his paint colors after them. “Annette and Cécile make purple,” he might say as he combined the blue and red hues.

What most people don’t know is that just before the girls were born, a significant change was made to the lone pediatric vaccine children received at that time. Aluminum was added to the diphtheria shot in 1932—a move that would mean children all over the country would begin receiving an injected metallic substance for the first time in recorded history. Initially the public was reluctant to accept this new vaccine. The old version had many problems and was especially dangerous.

Because the Dionne quints were so famous—as was the doctor who helped deliver them—he was employed in a giant PR stunt. The Dionne quints received three shots of the new aluminum-containing diphtheria vaccine—a medical procedure caught on camera and plastered in newspapers all over the country. The effect was instantaneous. Parents saw the images of the most precious, watched-over children on the planet receiving this new vaccine and began to insist their children receive the same shot.

Shortly after the shot, Emilie Dionne began to experience problems. Because a lot of advertising money was at stake, they were very secretive about the girls’ health. But looking through books and articles about them, you can tell something happened to Emilie. She started having what they called “fainting spells,” or what we might call absence seizures today. Later accounts would describe her as “alone” and “lost to herself.” A photo in a Life magazine article shows the girls handwriting at 7 years old. Emilie’s is clearly different than the others, showing signs of dysgraphia, a writing and communication disorder frequently associated with autism.

Emilie’s story takes an unexpected turn as the girls eventually turn 9 years old and move back into a huge house the government built for them and the rest of her family (now numbering twelve!). I’ll save that for the book, but it really struck me as I was researching the connection that Donald Triplett and Emilie Dionne likely shared. He knew of her, as everyone did, but she had never heard of him. In retrospect, it is likely they both could have been diagnosed with autism given their symptoms.

The story of the Dionne quintuplets is absolutely fascinating, if you’ve never heard of them. Their possible connection to the original autism vaccine is equally intriguing. I touch on Emilie and Donald’s life story throughout the book as they grow up in very different situations with very similar challenges.

Even if you don’t feel like you’re a good reader, The Autism Vaccine is written simply and in a way that makes it a breeze to go through. I hope you can give the new book a try—I think you’ll find so much new information about the origins of autism and the specifics of what is causing it. Emilie’s story is fascinating on its own, but within the narrative of the origins of autism, is really enlightening. It is not an easy subject to talk about, obviously, but with some courage, more people may be able to face the reality of what is causing this epidemic.

Thanks for reading along, and if you’re interested in a copy of the book, you can get it here:

If you were hoping for Amazon to carry "The Autism Vaccine," I'm happy to report they are selling it now. For those of you who signed that petition to help 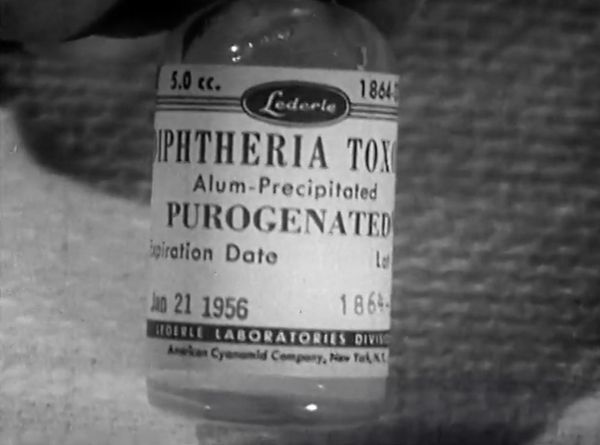 Did you know the first vaccine to cause autism was the diphtheria shot? Around 1932 the US & Austria added aluminum to diphtheria shots—the first time in recorded history that